A couple of weeks ago we hiked up Monte Redentore in the Aurunci mountains, just over the border in Lazio. There was bright sunshine and a deep blue, cloudless sky. We parked below Refuge Pornito (which garnered some giggles of course) and set off. After only a couple of minutes there were whistles as a tiny, lithe boy raced up the hill past us, followed quickly by a large herd of goats. They completely surrounded us on the trail much to the delight of my two boys. He shooed the guard dog towards the trail and left them to it. The path zig-zagged up the steep, rocky valley to the top of the mountain so we walked gently, trying to spot the goats up ahead as they traced the contours in search of new shoots; tiny dots skittering sideways, perfectly camouflaged on the rock. We came across a little cave by the path with the remnants of a camp fire and pretended we were hiding from a dragon. Up ahead there was a cross overlooking the village of Maranola in the valley below. The boys made it this far and then meandered back with my husband, which gave me an hour or so to run on. 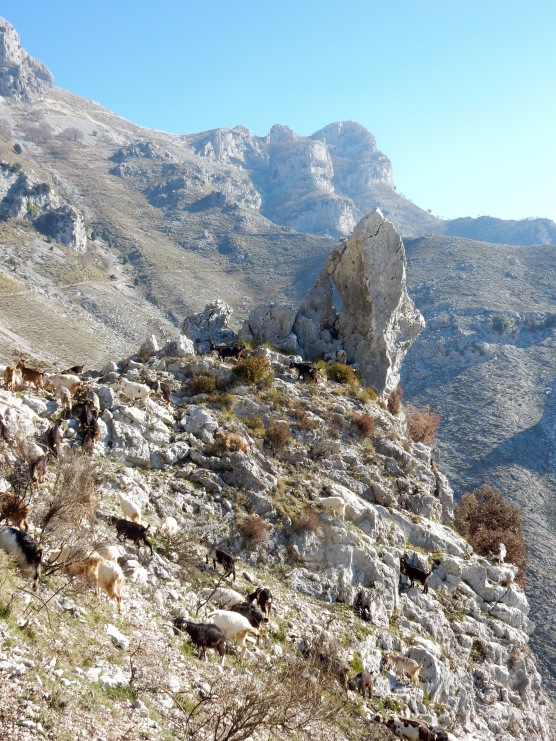 A rickety wooden fence cast geometric shadows on the sandy path and the rocky outcrops high above seemed completely white, bleached by the sun.  I ran carefully around vivid pink crocuses and every so often paused to watch birds of prey soaring on the thermals. Bright green pampas grass and a few slender trees clung to the valley sides. After a good climb I reached the beautiful Sanctuary of San Michele which is carved into the rock. It’s beside a natural spring and I splashed my face to cool off. After some more hairpin bends I reached the shoulder of the mountain and crossed an almost bare karst plateau with a winding trail inviting me to carry on to Monte San Michele and Monte Petronella – saved for another day. 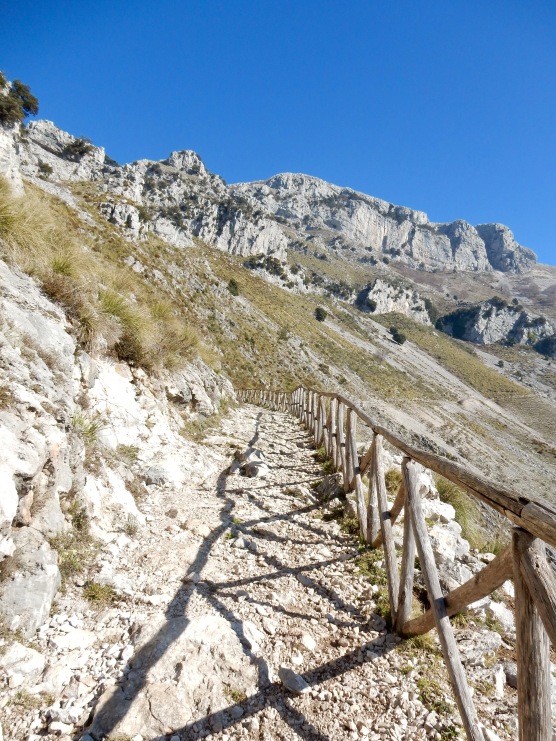 I climbed up to the statue of San Michele at the top and sat for a moment absorbing the view – mountains rising steeply from the sea, a deep green pine forest and a golden curve of coastline stretching in a great arc from the Amalfi in the south to Gaeta in the north. I picked out the now familiar shapes of the hills and each island in the glistening bay. It was completely silent, the sort of silence that’s so rare you try to hear it to check it’s real, so whole you might reach out and touch it. There was no time for reverie though, as we’d promised the boys a cinema trip later in the day. 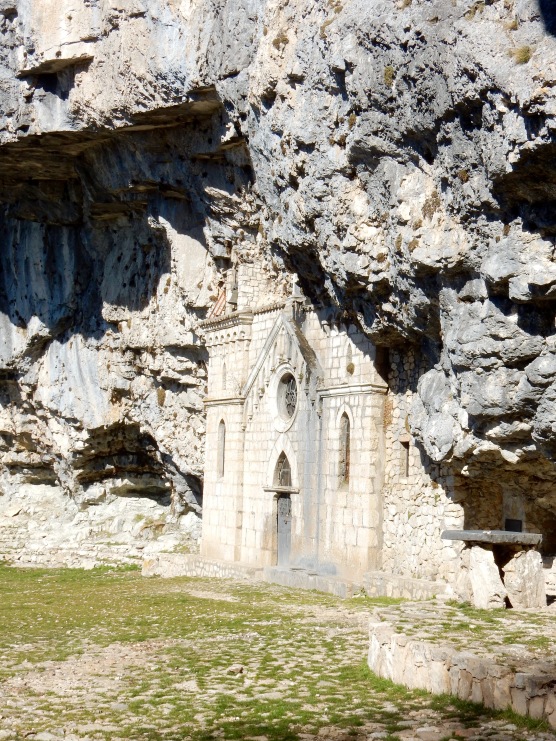 I ran back down with full concentration so as not to stumble, in a semi-meditative state, just my steps on the path, over and over, a cool wind on my face and pockets of heat radiating from the sun-warmed rocks. I thought about advice from ultra runner Kilian Journet where he describes taking small steps, relaxed, poised and light. I felt such a high, from the run and endorphins of course, but more than that – pure joy at the peace, sunshine and mountains in all their glory. 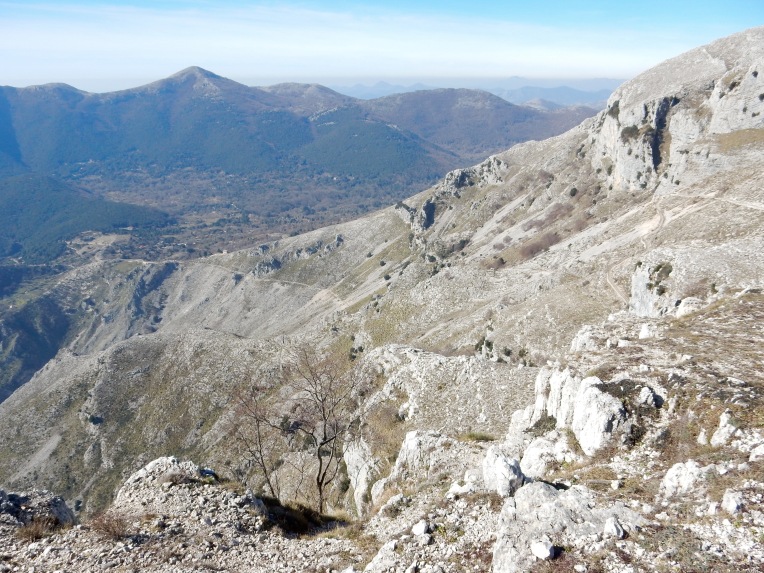 Over New Year, I read an article; ‘Praise Song for Wide Open Spaces’ by On Being columnist Omid Safi, which talks about the exhilarating emotions that nature can draw out of us, ‘So many of us live lives that are disconnected from meaningful contact with fellow human beings, from a touch that heals, from nature, from the sacred. And yet there is something in us that responds to the call of the wild. The minute that we are in the woods, by a body of water, next to a mountain, listening to the wind in the desert, something in our hearts responds to the beauty and acknowledges the majesty’. That something stayed with me for days after this walk. A sort of secret, high-fiving, smile inside which no amount of the every day can dull. 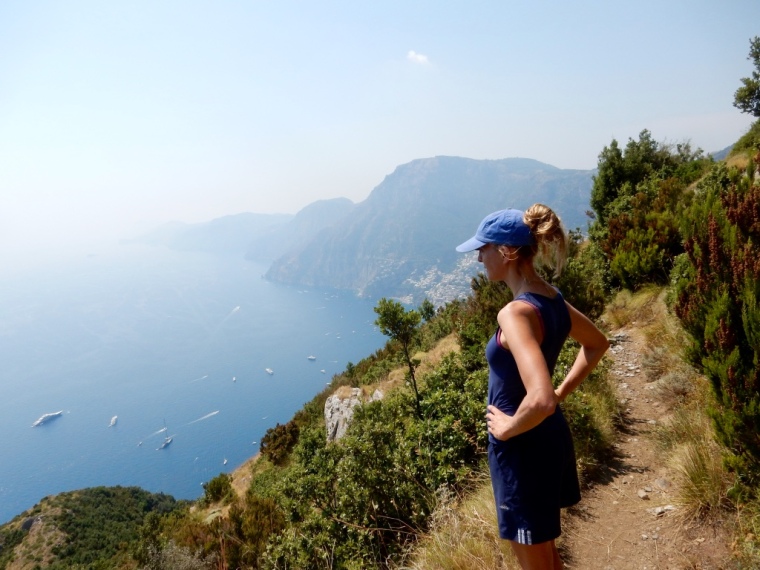 Hiking Campania is a blog about beautiful and exhilarating walks in the hills, mountains and coastal regions of Campania, Italy. Download the info for self-guided trips or join a Hiking Campania group walk. For the latest info please check my Facebook page.

Reading Mountains of the Mind, a captivating account of mountaineering through the ages

Watching the trailer for Like a Wolf, a soon-to-be-released film about skier and mum Kit DesLaurier's journey to ski the 7 summits

Check out Inspiration for more picks...